“We were so afraid for our daughter. It’s so amazing what they were able to do to save her." 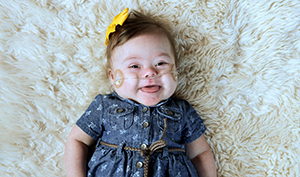 When Jillian was born, doctors delivered life-changing news to her parents, Andrea and Matt. Their little girl had Down syndrome, a hole in her heart, and there was fluid around her lungs and abdomen.

Doctors placed a tube in her chest to help the fluid drain. In most children, this situation corrects itself, especially with the help of a drainage tube. In the meantime, “The doctors told us that Jillian was going to need heart surgery to close the hole,” Andrea says. “We were told our best choices were Nemours and a well-known children’s hospital in Philadelphia.”

They chose Nemours Children’s Health System, since they already had a positive relationship with a Nemours pediatrician for their 2-year-old son.

Nemours sent a specially equipped transport vehicle to safely move Jillian to Nemours/Alfred I. duPont Hospital for Children in Wilmington, Delaware. Jillian spent a month in the Neonatal Intensive Care Unit (NICU) to gain enough strength for open-heart surgery, which she had at just 5 weeks old.

Nemours pediatric cardiothoracic surgeon Dr. Christian Pizarro closed the hole in Jillian’s heart, and she spent one month in the Nemours Cardiac Intensive Care Unit (CICU) recovering from the heart surgery, but the swelling did not get better on its own.

Andrea and Matt were told that Jillian had chylous effusions (also called chylous ascites). This is a rare condition when the body’s lymph fluid doesn’t empty into the bloodstream as it should, but instead leaks out through tiny lymphatic vessels into the chest and abdomen. The causes of this condition are unknown, and only a very small percentage of kids have this.

A Breakthrough in Treatment for Lymphatic Problems

Fortunately, Nemours Children’s Health System offers one of the very few lymphatics programs in the country that performs groundbreaking treatments for conditions like Jillian’s.

Interventional radiologists are specialists who use imaging to guide procedures performed with long, thin flexible tubes (called catheters) inserted into blood vessels. Dr. Deborah Rabinowitz and Dr. Maxim Itkin are two of the renowned IR specialists at the duPont Hospital for Children, and they performed a procedure called a lymphangiogram to confirm Jillian’s diagnosis.

Then they injected a dye and watched a live X-ray to see where the lymph was leaking. Their goal was then to block off all these detours, so the lymph fluid could properly return to the bloodstream, a procedure called a lymphatic embolization.

“The procedure was very quick,” Andrea says. “Doctors injected a special liquid into an artery in Jillian’s groin. This liquid traveled to all the places where the lymph fluid was leaking out and it blocked the leaks. Dr. Rabinowitz showed us images of the results in her office after the procedure.”

And that was it. Within 24 hours, Jillian’s lungs and chest cavity were no longer filling with new lymphatic fluid. And, after Jillian spent another few weeks in the hospital recovering, Andrea and Matt were told the good news — the existing swelling had all but disappeared and Jillian could go home!

It had been a long 13 weeks. Andrea and Matt had been making the hour-long drive with their 2-year-old son to and from duPont Hospital for Children nearly every day to be with Jillian. Sometimes they were able to stay over, and the social work team connected them with the Ronald McDonald House of Delaware across the street (which offers families an affordable home away from home).

Nine months later, little Jillian’s family celebrated her first birthday. Andrea reports that Jillian is doing great, with no further problems from lymphatic fluid. She is very appreciative of the care her daughter received at duPont Hospital for Children.

“Everyone at Nemours was great, from the doctors to the nurses to rest of the staff, even the volunteers. They were all very caring and understanding. We couldn’t be more pleased with her care.”

“I only had to decide what kind of cake to have for her party,” Jillian’s mom said with a smile."