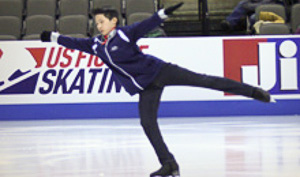 Tony Lu started figure skating when he was just 5 years old. Now at 14, his dream was to win nationals. But the larger, looming question is whether he would be able to perform at his best, due to a prolonged back injury.

Sidelined by Reinjury and Pain

Tony, of Garnet Valley, Pa., had fallen down the stairs and injured his lower back. Having rested for two weeks, he returned to his training regimen. But when Tony practiced his triple jumps, which occasionally resulted in falls, the pain came back.

In his free skate at regional championships, he fell on his first triple jump and hit his lower back in the exact same spot as his previous injury. This time the pain was more severe. Pushing through the pain and discomfort, Tony was somehow able to complete his skating program, including all other triple jumps and placed 2nd at Regionals. A month later, he placed 2nd at Sectionals, making him eligible to compete in Nationals. But, since then, his skating practices have been limited due to ongoing pain. Tony’s decreased activity has resulted in the muscles and ligaments surrounding his injured area to become weaker and tighter.

At the suggestion of his skating coach, Tony met with Angela Smith, MD, both a U.S. Figure Skating Association double gold medalist and a pediatric sports medicine specialist at the Nemours/Alfred I. duPont Hospital for Children’s Center for Sports Medicine in Wilmington, Del. Dr. Smith prescribed physical therapy to build Tony’s core strength and flexibility, and to help reduce his pain by ultimately reducing the strain on Tony’s back.

Thanks to his physical therapy regimen, Tony is not only competing again, he placed 9th at nationals.