“The kids with diabetes at Nemours Children’s Clinic are lucky,” says Lexi. “My mom knows so much and they get the education they need.” 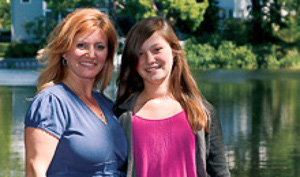 “When I saw my three-year-old daughter literally hugging the water fountain at her preschool and gulping down water, I knew there was something very wrong,” says Kim Rossi. She and her husband Tony took Lexi to their pediatrician right away. A urine test showed that her blood sugar was 200 — not off the charts, but still worrisome. The doctor sent them to Nemours Children’s Specialty Care, Orlando.

“They confirmed that she was diabetic and gave her the first insulin injection,” remembers Kim. “I cried and cried because I was so afraid for her. The diabetes team helped us learn survival skills to get through the next few days: what she should eat, how to test her blood sugar, how to give injections, what to do in case of a seizure. They also asked us to page them with her blood sugars every few hours over the weekend.”

The following Monday, Kim and Tony met with the entire diabetes team: an endocrinologist, diabetes educator and dietician. They learned how to manage their daughter’s disease. “Getting this education was incredibly important for us — it helped us to feel more in control. Diabetes really involves your whole family,” says Kim. “If we hadn’t gotten the care we received from Nemours, we would have been lost.”

The family moved to Las Vegas, where Tony had taken a job as a nightclub manager. Kim, a trained dancer who had worked for Disney, opened a dance studio. “After a few years, I began to realize that I wanted to do something different with my life,” says Kim. “I enrolled at the School of Nursing of the University of Nevada, Las Vegas, earned a Bachelor of Science in Nursing and worked for the county hospital.”

Lexi began using an insulin pump when she was five years old. During the next few years, she had two hypoglycemic seizures caused by her blood sugar dropping extremely low. “When she had the first one at age six, it was frightening,” remembers Kim. “She gave out a high-pitched ‘siren’ scream. Lexi’s face was drooping on one side and her body was slack. She was hospitalized and not able to speak for three days.”

After living in Las Vegas for seven years, Kim and her family made the decision to move back to the Orlando area, where she became a Certified Diabetes Educator. “There was an opening for a diabetes educator at Nemours Children’s Specialty Care. It is one of the few places I know where clinical care and education are so successfully combined — and the only place I would have moved because of a job,” she says.

At age 13, Lexi does an excellent job of managing her diabetes. She wears an insulin pump and a continuous glucose monitor and checks her blood sugar at least eight times a day. Lexi never goes anywhere without carrying insulin, a blood sugar meter, glucogon, juice and food. “It’s pretty easy to manage,” says Lexi. “I have a friend at school who is diabetic and I always remind her to check her sugar and get it treated right away when it is high.”

“My daughter really doesn’t know anything different,” says Kim. “As a parent, you can’t stop all the bad things that might happen or protect your child all the time. That’s why education is so important.”

“Because of my personal experience with my daughter, I am able to tell parents that it will not always be like it is when their child is first diagnosed,” says Kim. “I love what I do — I guess it’s my calling — and enjoy working with the kids. Our family got so much benefit from Nemours and now I am in a position to help others.”

“The kids with diabetes at Nemours Children’s Specialty Care are lucky,” says Lexi. “My mom knows so much and they get the education they need.”