"Our Nemours doctor was truly interested in finding the best treatment for our son’s condition. She treated Corey as if he were her own child." 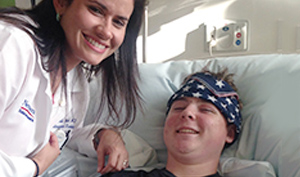 15-year-old Corey played lacrosse and marched in his high school band. The confident, outgoing teen — and vice president of his sophomore class — had never experienced a serious health problem. No one was aware he was even in danger until it was an emergency.

His mother Tammy was on a business trip when Corey awakened to discover that his left leg had swelled to twice its normal size during the night — and it was beginning to turn purple. “My sister-in-law rushed Corey to our pediatrician in Melbourne, and the doctor immediately sent him to the local Emergency Department for an ultrasound,” says Tammy.

Tammy’s husband arrived at the ED just in time to learn that Corey had a massive blood clot from his knee to his hip, a condition called deep vein thrombosis (DVT). Before they knew it, Corey was in an ambulance headed to Nemours Children’s Hospital, Orlando.

Family-Centered Care in a Serious Situation

Right from the start, Tammy loved Dr. Weber because she was so calming. "As frantic as I was, she helped me relax, encouraged us to ask questions and didn’t rush us through it at all," Tammy states. "Corey was in the intensive care unit and everything was a blur. We had never been through anything like this."

Dr. Weber explained to the family that before performing surgery on his leg, her first goal was to insert a filter through the jugular vein in Corey’s neck and thread it through his heart into the inferior vena cava (IVC) — the large vein that circulates blood from the lower half of the body into the right atrium of the heart. This filter would protect Corey’s heart and lungs from any fragments that could break off from the blood clot in his leg.

But during this procedure, Dr. Weber discovered another problem: Corey’s IVC was blocked by multiple blood clots that had hardened and were impossible to penetrate. Fortunately, a whole highway system of collateral veins had developed to move blood around the blocked IVC, which meant that the condition was stable enough for Dr. Weber to tend to the immediate problem of removing the blood clot in Corey’s leg.

Since she couldn’t use a filter, Dr. Weber inserted a tiny infusion tube through a vein in the back of Corey’s knee and upward to the pelvic area. The tube delivered medication overnight to help soften and clear the clot (a process called chemical thrombolysis). In the morning, Dr. Weber took Corey into surgery, removed the infusion tube and used another tube to break the remaining clot and gently suction it out of the vein with an image-guided radiological technique known as mechanical thrombolysis.

Afterwards, Dr. Weber showed the family how the minimally invasive surgery worked. "It’s really an amazing procedure that doesn’t require large incisions," Tammy explains. "They shoot dye into the area and record it on a big screen. We saw exactly where the clot began and ended, and how it was cleared."

Taking Care With Every Care Step

The next hurdle was addressing Corey’s blocked IVC.

"Once again, we were so impressed with Dr. Weber," remembers Tammy. "She consulted with her Nemours colleagues to ensure that our child’s plan was in line with the very latest medical thought and current practice. We really liked that she was so open and truly interested in finding the best treatment plan for our son’s condition."

Corey and the family bonded with Dr. Weber during this process and they trusted her 100 percent. "She treated Corey as if he were her own child," Tammy adds fondly.

Dr. Weber suggested a conservative treatment for Corey’s blocked IVC. Along with Dr. Paul Gordon from hematology/oncology, they put him on an anticoagulant medication to reduce the risk of more clots forming.

"We couldn’t be happier with our care at Nemours," Tammy says.

For Corey, the toughest part is that he can’t play lacrosse while he’s on a blood thinner. "We’re lucky he has many other interests and a super bunch of friends," she adds. "And his lacrosse coach and the school athletic director allow him to work out with the team, which keeps him connected."