“I don’t know where Alex would be without Dr. Loveless,” says Steven. “We really got lucky when we found Nemours.” 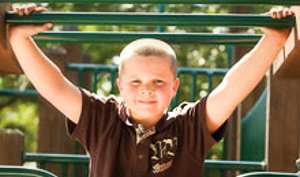 Eight-year-old Alex is in constant motion. The difference in the length of his legs and wearing a built-up sneaker doesn’t slow him down one bit. His doctor at Nemours has nicknamed him, “Wild Man.”

In the moments after Alex was born, his mother’s obstetrician said, “I think his right leg is short.” That was the beginning of a long journey for Alex and his parents. Steven and Kathy immediately began to seek help for their baby, first taking him to a pediatrician and then to an orthopedic institute for adults when he was just two weeks old. “The doctor there said the best thing was to amputate his shorter leg before he was old enough to understand,” remembers Steven. “We were so scared. My wife and I went out to the car and just sobbed. Removing his perfectly healthy leg was just not an option.”

After initially investigating a pediatric hospital in another city in Florida, the family found Nemours Children's Health, Jacksonville. There they met Eric Loveless, MD. “Everything immediately became easier,” says Kathy. “Dr. Loveless very quickly came up with a plan of action and laid out three options for us: surgical rotation of the limb or amputation (both of which would require a prosthesis), or a limb-lengthening procedure. After discussing all the options in detail, we chose limb-lengthening.”

“Dr. Loveless wanted to know all about us,” recalls Steven. “He said there would be a very long road ahead and we needed to be prepared for a lot of work to help Alex get through it. Dr. Loveless was very straightforward and optimistic — I think he’s one of the greatest doctors I’ve ever met.”

The first step was a surgical reconstruction of Alex’s hip to correct a deformity there. Dr. Loveless broke and re-shaped the head of the femur (thighbone). Alex was placed in a cast and spent five days in the hospital.

About a year later, Dr. Loveless performed Alex’s first limb-lengthening procedure. After surgically dividing the femur, he slightly separated the bone ends with an external “fixator” made of pins and metal halos. During the next few weeks, as new bone was produced in the gap, Kathy and Steven turned the screws a little each day to gradually increase the length of Alex’s leg.

Dr. Loveless next wanted to do surgery to place a rod down Alex’s femur. When they took an X-ray, it showed that Alex had somehow managed to break his leg while in his cast! The surgery was postponed and Alex got a new cast.

In another operation, Dr. Loveless removed the rod and stabilized the femur with a metal plate. In a year or two, Alex will have yet another limb-lengthening surgery to equalize his legs. There is a possibility that his left leg might have to be shortened in order to achieve the goal of having his legs match exactly. “Dr. Loveless is very hopeful that we will get a good result,” says Steven. “We have absolutely no regrets about the road we have chosen.”

Alex seems unconcerned about it all. He knows that roughhousing with his friends or his sister Tylyn is out, as are contact sports like football, but he enjoys swimming and many other activities. A career in the Army is his ultimate goal. “I like the training and want to fight for my country,” Alex states. “I think Dr. Loveless is a fine doctor. He takes care of me and even plays with me.”

“I don’t know where Alex would be without Dr. Loveless,” says Steven. “We really got lucky when we found Nemours.”