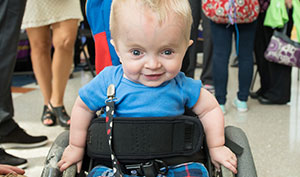 Isaiah has osteogenesis imperfecta — “OI” for short. It’s also called “brittle bone disease.” When Isaiah’s mom, Vicky, went to the doctor for her 20-month checkup, her doctors realized there was something wrong. Isaiah’s legs were significantly bowed, and his arms were shorter than normal. His rib cage was broken, and he had lots of other fractures.

She gave birth to Isaiah at Thomas Jefferson University Hospital. At the time, the doctors weren’t sure he was going to survive the experience, because his bones were so fragile. They didn’t think he would cry, because he would be in too much pain. But he did — he cried so loudly that the family could hear it from next door.

Getting Stronger With Nemours

Isaiah was transferred to Nemours/Alfred I. duPont Hospital for Children in Wilmington, Del. three days later, and has been a patient ever since. He required a lot of treatment when he was first born. He broke several bones just doing what normal babies do — pushing against his mother or sneezing, for instance. Vicky learned how to splint him when he does have “a break.”

Now, Nemours is giving him treatment to strengthen his bones, which is a gradual process … but it’s working. Vicky used to have to carry him around on a pillow, because he required that amount of cushioning. Now, she can hold him, just differently than you would hold another two-year old, to be gentle on his joints. He is also receiving physical therapy.

Looking Toward a Healthy Future

As for the future — he will always be shorter than other people. Up until puberty, he should be more fragile than other children, but after that, he should be stronger. He can’t walk now, but she is hopeful that he will be able to walk in the future, and she wants him to lead as normal of a life as he can. She is confident that Nemours’ doctors will help him with that.

Cognitively, little Isaiah is just fine. His first words were “Dada” and “Quack.”