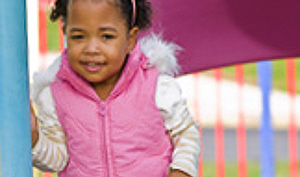 Two-year-old Icylin Shawn Simpson is a walking miracle, having survived many serious threats to her health. “I had a very difficult pregnancy,” says her mother Jessica. “I was on bed rest and medication after about four months. Then my water broke at 24 weeks.” Although Jessica was put on medication to stop labor, Icylin was born 15 weeks early at Atlanticare Hospital in New Jersey, weighing just one pound, seven ounces and measuring under 12 inches long.

The tiny girl suffered many of the problems common to micro preemies, as babies of her weight and gestational age are known. “Her eyes were fused shut, and she had to have a breathing tube put into her throat,” remembers Jessica. “She was also jaundiced and had a Grade 3 hemorrhage in her brain. My husband Shawn and I were warned that she could end up with cerebral palsy, blindness or mental retardation. It was really devastating.”

When Icylin was just a week old, she was airlifted to Nemours/Alfred I. duPont Hospital for Children, Wilmington, Del., for emergency surgery to repair a perforated bowel. “The doctors also discovered a problem with a heart valve that had to be corrected,” says Jessica “She was very, very ill and had multiple infections.” Icylin spent the next five months in the Newborn Intensive Care Unit (NICU) at the Hospital. “My daughter was the very first baby to be moved into the beautiful new NICU from the old unit,” says Jessica.

The baby made a high-pitched sound when breathing. When she was examined under anesthesia with a bronchoscope, doctors found a narrowing of the airway. Surgery was performed to give Icylin an external opening for breathing and she was attached to a ventilator. “Shawn and I had to go through training so that we could learn how to care for her,” says Jessica.

Icylin finally came home. “She had 16-hour nursing care at first,” says Jessica, “but soon I was taking care of her on my own. Gradually, we were able to wean her off the ventilator. During that period, she was constantly sick with infections and viruses.”

In March of 2009, Icylin returned to duPont Hospital for surgery to reconstruct her trachea. During the seven-hour operation, Patrick Barth, MD, an otolaryngologist, took cartilage from Icylin’s rib to structure a new airway for the baby. During the two week hospital stay, Jessica never left her daughter’s side, seeing her two older daughters only once a week. “I cried a lot because I missed them so much,” she says. Icylin once again went home.

“48 hours later, she was unable to breathe,” says Jessica. “We rushed her to our local emergency department and they sent her back to duPont Hospital. Another bronchoscopy showed that a web of scar tissue was blocking 80 percent of her airway. Dr. Barth cleaned up the area surgically and dilated the airway with a balloon. Icylin had to be brought back to the Hospital each week for repeat bronchoscopies to ensure that the repair was holding and that her airway was open.

Today, Icylin is a friendly, curious toddler who is doing beautifully. All that remains of her long ordeal are some surgical scars and breathing that is somewhat noisy due to air turbulence in her trachea. Her mother says, “My daughter inspires my husband and me and has made our family so strong. Because of Icylin we have learned to appreciate life for what life is and to thank God for each day that he has given us.”