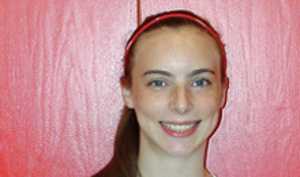 Leighanne Eachus first knew something was wrong when her pain progressively got worse during gymnastics training. She began with simple home treatment of ice and rest, but that didn’t ease the pain. So she traveled from her home in Mullica Hill, N.J., to Nemours/Alfred I. duPont Hospital for Children in Wilmington, Del., for a consultation with one of the pediatric sports medicine specialists at the Center for Sports Medicine.

Leighanne’s greatest fear was realized when a bone scan confirmed that she had a stress fracture in her spine. The worst part, she says: Learning that she wasn’t going to be able to compete in gymnastics that season, even though the season had just begun.

Together, the sports medicine physician and physical therapist helped Leighanne’s injury heal, while helping her maintain a positive outlook. During the next five months, they taught her ways to make her body stronger and more efficient, while also correcting some of her gymnastics techniques and training methods that may have contributed to her injury. Her physical therapist explained that the training she was doing as part of her rehabilitation would ultimately make her an even better gymnast.

Back — and Better Than Ever

Leighanne has returned to gymnastics and even moved to the next level of competition. She’s training at a more advanced level today than she did prior to her injury. After reviewing her treatment plan from the Center for Sports Medicine with her physical therapist, Leighanne and her coach have adjusted her training to include strengthening and stretching exercises that will continue to build her core strength. The first season after her injury, she placed 2nd in the region on the uneven bars and 3rd in the state of New Jersey on the vault. Her physical therapist had been right — she was now better than ever.