“Our family experienced top-notch service at duPont Hospital, we couldn’t imagine going through this without the doctors, nurses, and caregivers there. Their excellent care and the prayers of hundreds of people were what pulled Luke through.” 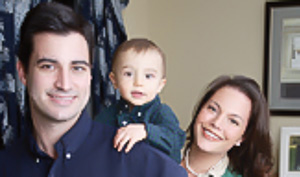 “He had to stay in the warming bed because he could not maintain his body temperature,” remembers Meredith. “When I was finally allowed to nurse him, he kept gasping for breath. Our nurse also noticed that his little fingers and toes had turned blue.”

Luke was taken immediately to the nursery where tests showed that he was getting only 20 percent of the oxygen he needed. An emergency call was placed to Paul Anisman, MD, of the Nemours Cardiac Center at Nemours/Alfred I. duPont Hospital for Children, who examined Luke and talked to his worried parents.

“When he began drawing a diagram of a heart for us, I began to realize that our baby was really in trouble,” says Michael.

Although she had just undergone a C-section, Meredith was wheeled to the nursery to say goodbye to her baby before he was taken by helicopter to Wilmington.

“All I could think was, ‘Just save my son.’ He was so pale — I just told him that everything would be all right,” says Meredith.

Michael’s parents drove to Wilmington with him and waited while Luke was prepared for his surgery.

“Dr. Pizarro, who would perform the surgery, came out and confirmed what we had been told by Dr. Anisman,” remembers Michael.

Luke had a condition called Total Anomalous Pulmonary Venous Return with Obstruction. Essentially, the plumbing of his heart was defective, with the pulmonary veins not reaching the left side of the heart. He was barely getting enough oxygenated blood to survive. Luke’s precarious condition required constant medical management in the hours before his surgery. During the 2½- hour procedure, a hospital social worker came out periodically to provide information about the progress of the operation.

“This was incredibly important to me — by this time, I was extremely worried about Luke’s survival,” comments Michael. “She really calmed our nerves.”

Dr. Pizarro was able to successfully reconnect the pulmonary vein to the back of the heart in order to allow oxygen-rich blood to be pumped to the baby’s body.

“He told us that Luke’s heart was only the size of a walnut and the veins he connected were a couple of millimeters in diameter,” marvels Michael. Just eight days after surgery, a pink and healthy Luke was allowed to go home. Today, he is completely healthy and active.

“Our family experienced top-notch service at duPont Hospital,” says Michael, “We couldn’t imagine going through this without the doctors, nurses, and caregivers there. Their excellent care and the prayers of hundreds of people were what pulled Luke through.”

On Luke’s first birthday, family and friends were invited to celebrate his recovery at a special party. In lieu of gifts, Michael and Meredith asked guests to make a contribution to the Nemours Partnership for Children’s Health to benefit the Cardiac Intensive Care Unit at Nemours/Alfred I. duPont Hospital for Children.

“If we can help families who are going through the kind of experience we had, that makes us happy,” says Meredith.