“I think what I appreciated most was the level of commitment and involvement from the division chief and from the whole team; how they listened to us, and to Emily herself.” 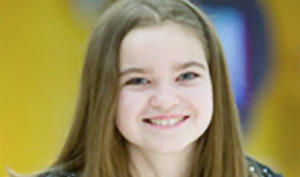 When Emily was 6 years old, her biggest worries were being the first one to the ball on her soccer team and remembering all the moves on her cheerleading squad. But one day, a pain on her right side took her by surprise.

“Emily’s pain was localized. I thought she might be having appendicitis,” said Emily’s mother, Colleen. “We rushed her to the emergency department.”

Yet at the ED, a battery of tests seemed to indicate that everything was normal and, with medication, Emily’s pain went away.

Emily experienced some pain in that area over the next few years, but in a developing, sports-minded young girl, a little muscle pain is not too unusual, so Emily’s pediatrician thought that Emily might have a pulled muscle or growing pains.

In July of last year, when Colleen picked her daughter up from summer camp, Emily complained of the pain again, and once again, they headed to the emergency department. This time an ultrasound revealed that Emily’s kidney was enlarged.

Dr. Ernesto Figueroa, Chief of the Division of Urology at Nemours/Alfred I. duPont Hospital for Children, suspected a congenital (present from birth) condition and ordered a renal (kidney) scan and other urological tests.

Emily spent that weekend in the hospital. She was in tremendous pain and there was blood in her urine.

“That was such a difficult time,” Emily’s mother recalled. “But the nurses and the doctors were so attentive to Emily and to our family. They were finally able to get Emily’s pain under control so that she could go home.”

When Emily and her mom returned for a follow-up appointment with Dr. Figueroa, he told them the tests showed there seemed to be an obstruction pressing down on Emily’s ureter (the connection between the kidney and bladder) which was causing both pain and a loss of kidney function. Emily’s kidney function was down to 26 percent.

Dr. Figueroa scheduled surgery in 3 weeks to allow time for the inflammation in Emily’s kidney to go down. In the meantime, he gave Emily’s mother his pager number and said to call if there were any problems.

“It was frightening to hear that surgery was needed,” said Colleen, “but I was confident that they knew what to do and how to help.”

A few days later, Emily’s pain worsened and Colleen called Dr. Figueroa. He met them at the emergency department at 9:30 at night and put in a nephrostomy tube to drain Emily’s urine into a bag and help relieve the pressure on her kidneys and bladder.

“Emily handled it so well, dealing with the situation.” Her mother reported. “I was very proud of her.”

Three weeks later, during a minimally invasive laparoscopic surgery, Nemours urologist, Dr. Jennifer Hagerty, discovered that a blood vessel had been pressing down and crushing Emily’s ureter. The vessel had grown as Emily had grown, which was why her pain had been intermittent.

After three nights in the hospital, Emily went home with a ureteral stent (a thin, flexible tube threaded into the ureter that helps the healing process), which was removed at a later appointment.

Today, at 10 years old, Emily is back to her favorite things: playing soccer, softball, basketball, and going to school.

Reflecting on her family’s experience with Nemours, Emily’s mother recalls: “I think what I appreciated most was the level of commitment and involvement from the division chief and from the whole team; how they listened to us, and to Emily herself.”

In fact, at one appointment, Emily brought her own list of carefully-written out questions about the treatment and the things she was worried about. Dr. Figueroa listened attentively, and then thoroughly answered each and every one.

To Dr. Figueroa, and all of Emily's care team members at Nemours, Emily is not just another patient. She’s a child with real feelings, hopes, and dreams — and now, the promise of a bright, healthy future.