“When you have a sick child, you want the very best for them. I’m glad Nemours was here to take care of Tatum: they become a part of your family during treatment.” 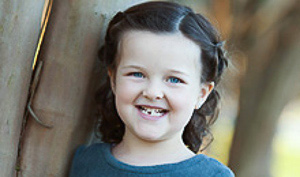 After a day of fun at SeaWorld in Orlando, Melissa Cempella noticed something very strange about her 2-year-old daughter. “Tatum was covered with bruises that were not there when I dressed her just that morning,” she remembers. “My mother-in-law is a nurse and she said to be sure and keep the routine doctor’s appointment I had for Tatum the next morning. I think she knew something was terribly wrong, but didn’t want to frighten us.”

“The next morning, her pediatrician ran a quick blood test. Her hemoglobin was extremely low. We were sent to the hospital for further blood work and then went home,” says Melissa. “The pediatrician called and asked that we come immediately to her office. She began to cry when she told us that Tatum would be admitted to the hospital.”

“When we arrived and went to the seventh floor, I immediately noticed that all the kids were bald — a shiver went down my spine,” says Melissa. Dr. Ramanoorthy Nagasubramanian, a Nemours oncologist known to his patients as “Dr. Naga”, confirmed that Tatum had high-risk acute lymphocytic leukemia (ALL) and began treatment immediately. By then perilously close to renal failure, she had surgery to place a port in her chest so that chemotherapy could begin.

Tatum’s treatment for ALL went on for 28 months. She was hospitalized three times, and had nearly two dozen spinal taps, many blood and platelet transfusions, chemotherapy and medications. “I felt that her childhood had been stolen from her,” remembers Melissa. “It was terrifying for Brad and me to watch her endure so much suffering.”

Tatum had a special way to keep track of all she was going through. She received a "Bead of Courage" for each treatment and procedure. Now, all of her beads are part of a two-foot-long keepsake necklace.

Although they were very protective of her, Brad and Melissa enrolled their daughter in a pre-kindergarten program so that she could spend time with other children. Baldness from her chemo treatments made her feel very different from others. “She insisted on getting a princess dress from Disney World because she thought she was ugly. Tatum didn’t want anyone to tease her or think she was a boy,” remembers Melissa.

A Need to Help Others

Melissa decided she wanted to raise money to help kids with cancer. She and a friend who owned a pet store decided to have a “Dogwash” offering shampoos, “paw-dicures” and massages. More than 100 dogs enjoyed a spa treatment in six baby pools. The second year, the event attracted sponsors, and they washed 200 dogs. The event grew to include a blood bank and bone marrow donor swab testing. Tatum, now in remission from leukemia, ran a lemonade stand and none-too-subtly encouraged her customers to donate their change.

Melissa also is an active member of the Family Advisory Council for Nemours Children’s Hospital. “Our family was there for the groundbreaking and topping off ceremonies. The new patient rooms will be amazing,” she says. “When you have a sick child, you want the very best for them. I’m glad Nemours was here to take care of Tatum: They become a part of your family during treatment.”

Tatum, now 6 years old, was recently asked to draw a picture of an “Everyday Hero” at school. Without hesitation, she drew her Nemours nurse, Robin Roberts, wearing scrubs and a stethoscope. “It made my heart melt,” says her mother.