“The kids just love him. He’s very laid back and always tells the kids, ‘You can call me anytime’ says Leslie. “We get excellent care from the entire team at duPont.” 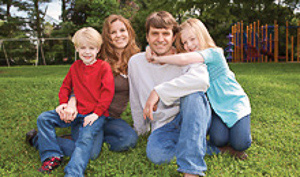 Nine-year-old Nicole does one-handed cartwheels across the floor. Her brother Andre, age six, shows off a yellow karate belt from the class he attends. Their vibrancy and enthusiasm belies the difficult fact that both children have cystic fibrosis, a serious genetic disorder.

“When my daughter was born, she cried constantly and had a painful red rash all over her body,” remembers their mother, Leslie Gill, a licensed practical nurse. “She wasn’t gaining and at four months only weighed eight pounds. I knew something was terribly wrong.”

Nicole was admitted to Nemours/Alfred I. duPont Hospital for Children and examined by a gastroenterologist. “She was vomiting, very pale and had an abnormal stool,” says Leslie. Within 48 hours, the family had an answer — baby Nicole had cystic fibrosis. “It was the farthest thing from my mind and a huge shock to my husband and me.”

Cystic fibrosis (CF) is a genetic disorder that affects the lungs and digestive system, making children vulnerable to repeated lung infections. It also disrupts the normal function of cells in sweat glands and glands that line passageways inside internal organs, causing a thick, sticky, coating of mucus. In the pancreas, this mucus blocks channels that carry important enzymes to the intestines, preventing the body from properly processing or absorbing fats and other nutrients.

“Nicole was given enzymes, vitamins and a special formula,” says Leslie. “We learned that the rash was from malnutrition. She simply wasn’t absorbing enough nutrients. Getting even a small amount into her every two hours took 45 minutes.” The treatments worked and 24 hours later, Nicole was a different baby: calm and smiling. After a two-week stay, she went home.

Leslie and husband Julian knew before Andre was born that he, too, would have CF. “At birth, he had an intestinal blockage often seen in newborns with the disease,” remembers Leslie. “Our son was rushed to duPont Hospital for surgery when he was only two days old.” A nonsurgical treatment relieved the remaining blockage and after a three-week hospital stay, Andre was on his way to recovery. He has had a more difficult time than his sister: Andre is small for his age and never feels hungry, making it hard for him to maintain his weight. Both children have a complex daily routine. Both morning and evening, they do vibrating vests for an hour to loosen mucus in their lungs. Andre and Nicole take 20-25 enzyme pills daily to help their digestion, use an inhaler and a nebulizer and are often on antibiotics for lung infections. “People who see my kids have no idea what it takes to keep them healthy,” remarks Leslie.

Aaron Chidekel, MD is the children’s pulmonologist. “The kids just love him. He’s very laid back and always tells the kids, ‘You can call me anytime,’” says Leslie. “We get excellent care from the entire team at duPont.” It is a testament to the loving care Leslie and her husband provide and the excellent medical attention they get from Dr. Chidekel that neither child has been hospitalized since infancy.

“Like any family, we have our good days and our bad days,” remarks Leslie. “I don’t dig for information about the future. We stay busy, active and as healthy as possible. The kids are real troopers.” Leslie does keep up with the latest information on clinical trials and research on the Cystic Fibrosis Foundation web site. “I know that in our lifetimes, we will see real improvement in the prospects for kids with CF — something big.”