Joey: Spiral Fracture of the Femur

Joey: Spiral Fracture of the Femur 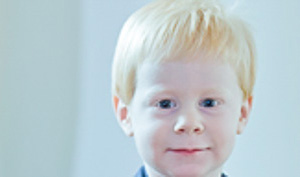 Two-year-old Joey was running around with the family dog when his mother Lynn saw his leg twist under him. Her little boy fell to the floor and screamed. “I had never heard a sound like that before,” remembers Lynn. “Joey was unable to stand and clearly in excruciating pain.” Lynn and her husband, Joe, rushed their son to a community hospital where he was diagnosed with a spiral fracture of the femur (thighbone). “We quickly realized that they were simply not equipped to deal with his situation,” says Lynn.

An emergency transport team was summoned from Nemours Children’s Hospital, Delaware, in Wilmingon, Del. When the ambulance arrived at the Hospital, a team headed by Kirk W. Dabney, MD, went into action, accurately evaluating his condition and developing a treatment plan. Joey was anesthetized so the fracture could be aligned for healing and was placed in a “spica” body cast that extended from his shoulders to the ankle of his broken leg and the knee of the other leg. “When he woke up, Joey had painful muscle spasms and was very frightened,” says his mother. “We stayed with him the whole night to help him be less anxious.”

“The doctors were really incredible,” says Lynn. “Everything happened just the way they said it would.” The Hospital loaned a car seat designed to accommodate Joey’s cast. “We were so grateful for that,” recalls Lynn. “Once we got home, Joey had to adjust to a new existence. He had been an active toddler and being immobilized was very difficult. Joey quickly learned to use his words to communicate. He came to see his cast as a safe place and learned to scoot himself across the floor.”

The family came back to the Hospital each week to check on the healing process. “At one point, Dr. Dabney was not happy with the alignment of the bone, so he put Joey in a new cast,” says Lynn. Finally, after seven weeks, Joey was freed from the cast and he was fully healed.

“Families in this area need to realize what a wonderful resource they have right in their own backyards,” marvels Lynn. “I’ll always come here when Joey needs care.”