“It's amazing. You would never know he had surgery ... [By the very next day,] he was back to himself.” 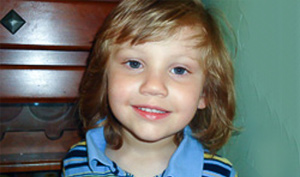 Connor’s mom suspected something wasn’t right. Her 2-year-old son had been running a fever and now had “smelly” urine. Connor was diagnosed with a urinary tract infection (UTI).

But since UTIs are rare in little boys, his pediatrician referred the family to Jennifer A. Hagerty, DO, a pediatric urologist and Director of Robotic Surgery at Nemours/Alfred I. duPont Hospital for Children in Wilmington, Del. After a complete workup, Dr. Hagerty discovered that Connor had severe vesicoureteral reflux, which was causing urine to backup in his kidney.

As the urologic specialist, Dr. Hagerty shared several options with Connor’s parents, including both a nonsurgical and a surgical intervention. Dr. Hagerty presented the pros and cons of each. Ultimately, the family agreed to a laparoscopic ureteroneocystotomy (the correction of the entrance of the ureter into the bladder), which would be performed using robotic-assisted technology.

Connor’s parents opted for the use of robotic-assisted surgery instead of traditional open surgery because, as Dr. Hagerty explained, he would likely have less pain, scarring and a shorter hospital stay.

Sure enough, Connor went home the day after surgery. “It’s amazing. You would never know he had surgery,” says his mom. By the very next day, “he was back to himself.”

At one month post-surgery, Connor has no residual pain, no limitations and no need for reflux medication. He is back to being a little boy — playing with his sister and being the tireless toddler that he is.