“Sometimes I look back and cannot believe we got through this experience. I give a lot of credit to the nurses for taking such good care of my daughter and to Child Life for keeping her occupied and less anxious.” 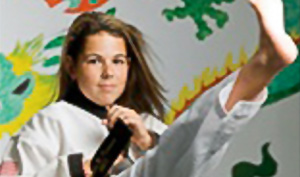 Three-year-old Natalia was not her usual high-spirited self. She seemed lethargic, as if she had a cold or the flu. Her pediatrician felt it was probably viral and wasn't concerned. But one morning, Natalia woke up with one side of her face drooping. She had Bell’s palsy, a compression of the facial nerve that can be caused by an infection.

At the emergency department of Nemours Children’s Hospital, Delaware, in Wilmington, Del., Natalia was tested for Lyme disease, which can cause Bell’s palsy, but the test was negative. Several weeks later, she was still not well and had stomach pains. A return visit to the hospital and blood work showed that she had full-blown, high-risk acute lymphocytic leukemia (ALL) and pneumonia as well.

Immediately, Natalia was admitted to the hospital, where she would remain for three weeks. Her oncologist, Rita Meek, MD, began chemotherapy two days later. “It was so hard,” remembers her mother Denni. “I can still see my husband standing by the window crying, as the rain poured down outside and he signed all the papers allowing them to treat Natalia. It was difficult to feel hopeful at that moment.”

The family had a new baby, Nicholas, who stayed in Natalia's room with Denni. “I was still nursing Nicholas and when my daughter woke up, she always wanted to see ‘her baby’,” says Denni.

“The next few months were a rollercoaster ride,” says Denni. “We were at the hospital three days a week for chemo and testing. Her immune system was suppressed and she had to go on steroids.” Natalia continued treatment for the next two and a half years, until she was pronounced free of cancer.

“Sometimes I look back and cannot believe we got through this experience,” says Denni. “I give a lot of credit to the nurses for taking such good care of my daughter and to Child Life for keeping her occupied and less anxious.”

“Dr. Meek is very special — in fact, phenomenal. I think of her as so much more than a doctor. She participates in the Leukemia & Lymphoma Society and the Breast Cancer Walk, is a wonderful baker, and travels all over,” says Denni. “I cannot say enough. She really cares about her patients and has become a good friend.”

Happily, Natalia made a full recovery from leukemia. She's a big sister to Nicholas, Cross and Ava. Because she has some learning differences due to side effects from the chemotherapy, Natalia attends a small school where she benefits from the smaller class size.

Natalia also holds a black belt in Tang Soo Do karate and plays lacrosse. She loves to swim, dance and go shopping with her friends — all the usual teenage stuff. Her mother is the founder of the Leukemia Research Foundation of Delaware , which raises money to help find a cure and better treatments for the disease.

“Leukemia isn’t a very big part of my life anymore,” says Natalia. “I try not to think about how it might have turned out and focus on the future.” Natalia loves to work with children and would like to be a teacher or perhaps a doctor.