“It is more important to heal completely from an injury than to rush back in for the sake of the season. Now, I understand stop points and warning signs, especially when it comes to head injuries.” 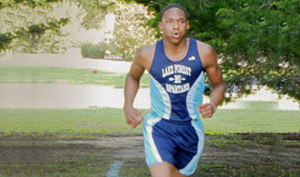 Wrestling had been an important part of Jumani Tilghman’s life for a long time. But in December of his junior year in high school, he experienced a major blow to his head that, according to Jumani, of Felton, Del., “left me unable to see and maintain my balance.” Even though he had a terrible headache, Jumani convinced his coach that “he was OK” so that he could compete in a tournament the very next day.

His headache continued but, as Jumani says, “I was so pumped up about the tournament that I didn’t let anyone know how I was feeling.” A few minutes into his match, Jumani lost his vision and balance, and he was overcome with severe head pain. He says he doesn’t remember the tournament at all. Jumani was rushed to the emergency department and diagnosed with a concussion.

Before his pediatrician would release him to wrestle again, Jumani was referred to a pediatric sports medicine specialist at Nemours/Alfred I. duPont Hospital for Children’s the Center for Sports Medicine in Wilmington, Del.

Jumani's doctor prescribed total mental and physical rest. No school. No wrestling. No activities. No television. No computer games. Rest. Jumani felt like an outcast, but his doctor took the time to explain everything that was happening and why “he felt different on the inside.”

Despite weekly meetings with the school, Jumani’s teachers did not understand the concept of mental rest and rehabilitation for a concussion injury. His injury — and the resulting involvement of his parents and a superintendent who listened with an open mind — led to the implementation of new procedures and baseline testing for concussions in his county.

Jumani learned a lot from the experience: “It is more important to heal completely from an injury than to rush back in for the sake of the season. Now, I understand stop points and warning signs, especially when it comes to head injuries.”

Following his recovery from the concussion, Jumani made the decision to stop playing contact sports altogether. He has transferred his athletic prowess into becoming an impressive track athlete, enjoying success in the long jump, triple jump, sprints relays and long distance running.