We can’t say enough about the doctors and nurses in the PICU. They were amazing – we could not have gotten through this terrifying experience without them. Melanie and I were encouraged to be a part of rounds each day and the nurses explained everything to us. It was like Hannah was their only patient.” 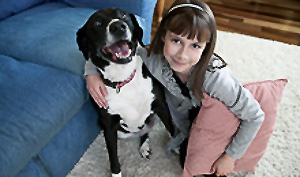 What first seemed like a simple tummy upset turned into a frightening ordeal for Hannah Barbas and her family. Eight-year-old Hannah was staying overnight at her grandmother’s house when she got sick to her stomach. Her mother Melanie came to take her home — by then her daughter was complaining of lower back pain.

After a sleepless night, Melanie took Hannah to an urgent care center near their home. “They didn’t find anything to worry about,” remembers Melanie, “but by the next morning, Hannah was pleading for me to take her to the pediatrician.”

The pediatrician suspected pneumonia. He used a pulse oximeter to measure the amount of oxygen in Hannah’s blood. It was only 81 percent, dangerously low. Hannah was taken by ambulance to the Emergency Department of Nemours/Alfred I. duPont Hospital for Children.

“Hannah was observed in the ED for quite a few hours and they started her on an antibiotic,” says Melanie. “Her breathing progressively worsened, even though she was using a B-PAP machine to maintain airway pressure. The doctors said they might have to put in a breathing tube.”

Hannah was admitted to the Hospital’s Pediatric Intensive Care Unit (PICU). She was going downhill fast. Fluid was beginning to collect around her lungs and she was going into septic shock, an overwhelming infection that affects all of the body’s organs. A chest tube was inserted to help drain fluid. Hannah’s creatinine level was very high, indicating that her kidney function was abnormal. Her liver was not working properly and her white blood cell count was very low.

“Hannah was intubated and had central and arterial lines put in for fluids and medications,” says Hannah’s father, Michael. “Over the next few days we watched and waited, hoping for her condition to improve. Finally, the cultures came back. Our daughter had Group A streptococcal pneumonia, a rare and life-threatening condition.”

Hannah small body was now swollen by 25 pounds of excess fluid. “Her blood pressure was too low and fluid was actually leaking out of her blood vessels into her body,” says Melanie. “She ran a fever the whole time and was given steroids and insulin in an effort to rescue her.” Michael and Melanie were told that her situation could deteriorate at any time and that she might not recover.

Hannah had a bronchoscopy so that doctors could look at her bronchial tubes and lungs. Lung surgery was considered. Finally, the work of the doctors and nurses in the PICU began to pay off. Hannah slowly returned to normal. Her breathing tube was removed after 11 days.

Another problem emerged, however. Due to the pressure of the excess fluid in Hannah’s system, her sciatic nerve was compressed, causing her left foot to drop. The doctors discovered a blood clot behind her left knee. She underwent an MRI to check for other clots and was put on a blood-thinning medication. After 21 days in the PICU, Hannah was moved to an inpatient rehabilitation unit. After spending an entire month on the hospital, she finally went home to her little brother Sam and her dog.

Today, Hannah is in excellent health, although she is still undergoing physical therapy at the Hospital to correct her dropped foot. “My pulmonologist told me that what I had was kind of like going out for a bike ride and seeing an elephant come down the street,” remarks Hannah.

“We can’t say enough about the doctors and nurses in the PICU,” says Michael. “They were amazing – we could not have gotten through this terrifying experience without them. Melanie and I were encouraged to be a part of rounds each day and the nurses explained everything to us. It was like Hannah was their only patient.”