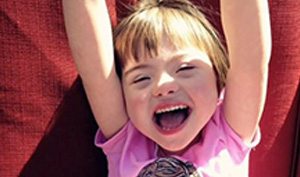 Nearly 7 years old, Franki Olivere is a little ball of fire. Her parents call her “Frank the Tank.” Franki’s mother, Maria, was closely monitored during her pregnancy and underwent a number of ultrasounds. On one ultrasound, Maria’s doctor noted that Franki’s limbs were measuring disproportionately short relative to her body length. The measurement raised a suspicion of Down syndrome. Franki’s parents were convinced that the diagnosis was wrong. They went on with their lives.

Early Signs of Other Problems

At a regular obstetrical appointment, Maria had another ultrasound, which noted a problem with Franki’s heart. A maternal-fetal medicine doctor performed an additional ultrasound and immediately sent Maria to Nemours/Alfred I. duPont Hospital for Children in Wilmington, Del., for additional testing and consultation with a pediatric cardiologist. When testing showed fluid around Franki’s heart and lungs, she was diagnosed with a condition called “hydrops fetalis.” Maria spent the remainder of her pregnancy with Franki as an inpatient in her delivery hospital until her doctors decided that it was safest for Franki to be delivered.

At birth, Maria’s doctors noted that Franki also had a condition called “imperforate anus” (a missing connection between the rectum and the anus that doesn’t allow stool out of the intestine). Franki was transferred to the Neonatal Intensive Care Unit (NICU) at duPont Hospital for Children and she had surgery when she was just two days old. Her first inpatient stay lasted 69 days.

Over the course of Franki’s first two years of life, she spent the majority of her days in the hospital. In addition to Down syndrome, heart and lung problems, and imperforate anus, Franki has asthma as well as issues with her kidneys and liver. She also has been diagnosed with a cerebrovascular condition called “Moyamoya” (a rare blood vessel disorder affecting the arteries that supply blood to the brain). The condition caused Franki to have mini strokes and ultimately required surgery.

Home Away From Home

Undeterred by her prolonged hospitalizations, Franki’s family celebrated all of her milestones — her baptism, her birthdays and all of the holidays — at duPont Hospital for Children.

Spending so much time in the hospital was difficult for Franki and her family, but they acknowledged its necessity. “It could be a scary place, but to us, it was a safe haven,” Maria recalls. “We were safe when we were there.”

Despite the challenges, whenever Franki comes to duPont Hospital for Children now, she walks in like she owns the place. She views the hospital as her second home. Maria shares that everyone at the hospital treats Franki as if she were their own child — from the Child Life staff who play with her, to her nurses who know her likes and dislikes, to “Uncle Doug” (Dr. Doug Katz, a Nemours pediatric surgeon who has been involved in Franki’s surgical care from her earliest days in the NICU).

Before Franki was born, Maria and her husband imagined what their daughter would be like. “When we were pregnant with her — and we decided we were going to name her Francesca and we were going to call her Franki — we just knew they were wrong about the Down syndrome. She didn’t have Down syndrome, you know? We just knew they were wrong,” she says. “She was going to be a lawyer, and her name was going to be Frank Olivere. And she was going to walk into that courtroom dressed to the T with a power suit on. They were going to go in there, and think that it was some guy who was coming in and here comes this girl as a corporate lawyer.”

Given all of Franki’s challenges, Maria now says: “She might not be a corporate lawyer — but she’s still going to walk into that courtroom dressed to the T in her little diva outfit and maybe she’ll be the stenographer. Or maybe she will be the lawyer. I learned a long time ago not to underestimate her. Maybe she’ll be the judge. She’s amazing.”