"We are so fortunate that our son is cared for by the most knowledgeable, talented and loving physicians we could ever hope for. Drs. O'Reilly and Napoli have made an immeasurable impact on our lives through their amazing support and care for Brennan" 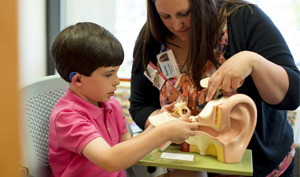 Brennan Aube of Newark, Del., was diagnosed at birth with microtia, a congenital condition in which a baby is born with an ear deformity or without one or both external ears. In Brennan’s case, it was a deformity of his right ear — his “little ear,” as he likes to call it. After failing his hearing test at birth, Brennan’s parents brought their newborn son to the Division of Otolaryngology (also called “Ear, Nose & Throat” or “ENT”) at Nemours/Alfred I. duPont Hospital for Children, Wilmington, Del. to receive care from Robert O’Reilly, MD.

A Series of Operations

Brennan needed three ear tube surgeries as well as a fourth surgery to remove auricular pits (pit-like depressions or dimples) above both of his ears. At the age of 5, Brennan also had reconstructive surgery to rebuild his outer right ear. This procedure was performed by plastic surgeon Joseph A. Napoli, MD with Dr. O’Reilly also in attendance.

In addition to his surgeries, Brennan worked with speech therapists to help with some speech issues due to his hearing loss. He’s also been working with duPont Hospital for Children’s audiologists, most recently getting his new ear mold to fit his reconstructed "new little ear." Brennan says he loves that he "can hear everything so much louder!"

During all of this, Brennan was also diagnosed with hemifacial microsomia, a condition in which the lower half of one side of the face is underdeveloped and doesn’t grow normally. In Brennan’s case, it’s very minor — the only noticeable sign of the condition is his adorable crooked smile.

Moving Forward — and Getting Involved

It’s been a journey to get to this point, but it’s not over yet. Although Brennan’s outer ear has been reconstructed, he has to wait another year to see if he’s a candidate for an inner ear reconstruction. This surgery, performed by Dr. O’Reilly, would open up Brennan’s ear canal and hopefully restore his hearing.

Brennan loves to share his story and talk about his "hearing aider" and how it stays on his ear better now since Dr. Napoli made his "little ear" look more like the other ear. His experience has had such a profound effect on the Aube family that they’re actively involved with the annual Nemours "Hear We Go" walk, held on the grounds of the Nemours Estate (Mansion and Gardens) to raise funds for (and awareness of) hearing loss and programs at duPont Hospital for Children.

Says Brennan’s mom, Melanie: "We are so fortunate that our son is cared for by the most knowledgeable, talented and loving physicians we could ever hope for. Drs. O'Reilly and Napoli have made an immeasurable impact on our lives through their amazing support and care for Brennan. We couldn't be more grateful and we are happy to give back in any way we can to support the efforts of Nemours/Alfred I. duPont Hospital for Children. It has been an honor being involved in the planning and organization of the annual ‘Hear We Go‘ 5K fun run/walk each year and it's a great way to meet other families and lend support and friendship to those dealing with hearing loss in our community."