“I like Dr. Shah because he is going to make me better.”

— Gavin, now 6, who has kyphoscoliosis 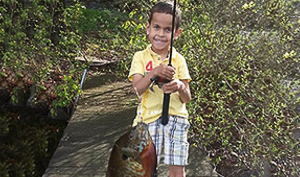 To see Gavin now, riding his bike, playing sports and beginning first grade, you’d never know what he's been through in his 6 years of life. Gavin has kyphoscoliosis (a spinal deformity in which the spine curves from both side to side and top to bottom).

Gavin was just 2 months old when his mother first noticed a curve in his spine as she was burping him. Their pediatrician referred Gavin to an orthopedic specialist who suggested a “watch and wait” approach since Gavin was so young. Over the next 2 years, the curve got worse so Gavin was fitted with a back brace to stop the curve progression. He wore the brace all day, every day for the next year, removing it only at night to sleep. But the curve continued to accelerate.

Gavin’s mom decided to get another opinion about what could be done to help her son. This time, the orthopedic surgeon prescribed a body cast that would stabilize Gavin’s torso and prevent further growth of the curve. Gavin wore the body cast for a year, changing it out every 3 months for a new one. This was a difficult time because Gavin wanted to play and was determined to keep up with the other kids. With the additional weight of the cast, he was frequently exhausted and needed extra naps. And still, the curve worsened.

In Search of Better Treatment Options

Feeling frustrated and knowing that Gavin needed to see an orthopedic specialist who had seen this type of very aggressive, early-onset kyphoscoliosis before, they found their way to the Spine and Scoliosis Center at Nemours/Alfred I. duPont Hospital for Children in Wilmington, Del.

Gavin’s mother vividly remembers their first meeting with Suken A. Shah, MD: "He had a very straightforward approach and knew definitively what to do." Dr. Shah recommended halo traction and the surgical insertion of self-lengthening growing rods that would reduce the curve and grow as Gavin grew. That was music to her ears — there was another way to help Gavin. And Gavin seemed to know this too. A bit shy, he whispered to his Mom, "I like Dr. Shah because he is going to make me better."

The surgery went very well and helped to alleviate the pressure on Gavin’s chest wall from his spine. This gave his lungs the room to expand and grow. As a result, Gavin has more energy, is more active, eats better, and is a happier kid. At this point, no additional surgeries may be needed for a while. Gavin has no limitations and his spirit of determination lives on — "I want to be a fireman or a cop when I grow up." And no doubt, you will, Gavin.