“It was just a miracle for us that our daughter could receive this life-saving treatment by Dr. Itkin and Dr. Rabinowitz.” 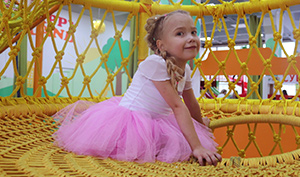 Little Karina had already had open-heart surgeries since she was 19 days old, but when she was just 3 and a half, another serious problem surfaced: her lungs kept filling with fluid and she coughed up a whitish, rubbery shape that looked like the branches of a tree — an image of the airways inside her lung. Doctors call this a bronchial cast.

After two years of tests and examinations, Anna, Karina’s mother, the condition was confirmed: “plastic bronchitis.” But, Anna was then told “In Russia, no one can help you. This disease is incurable.”

Anna searched abroad for a way to get Karina’s condition cared for. Meanwhile, Karina's condition only worsened. At one point, Karina could only lie down with an oxygen concentrator (a device that helped her breathe) for a period of three days and couldn’t cough up the bronchial casts that were blocking her lungs. Twice she couldn’t breathe at all.

Then, Anna found an online social group of mothers of children with a similar heart defect — one child in particular had the same lung condition as well. Together, they found Nemours/Alfred I. duPont Hospital for Children in Delaware and interventional radiologist Dr. Maxim Itkin. Interventional radiology uses small tools and precise imaging to diagnose and treat problems with the lymphatic system and vascular (circulatory) system. Dr. Itkin had been successfully operating on this type of disease for years.

Additional Challenges During a Worldwide Pandemic

With the help of Nemours Global Health and a charitable foundation, Karina’s family raised the funds they needed to fly to Delaware and have the necessary procedure. They flew to Germany, and then on to New York just as Germany’s borders were closing due to the worldwide COVID-19 pandemic. They made it to Delaware just as the hospital was cancelling many visits and procedures. Fortunately, Dr. Itkin and Dr. Deborah Rabinowitz were able to perform the planned procedure.

The doctors were able to close 90% of the abnormal lymphatic ducts that were causing Karina’s lungs to fill. Karina slowly recovered and Anna finally felt some relief from her constant years of worry. When the swelling lessened and her condition improved enough, the doctors performed a second procedure to completely close the chest lymphatic ducts. A week later, little Karina was discharged and she and her family were able to be on the last possible flight — as the pandemic worsened — to return Russian citizens from New York to Moscow.

Today, Karina is continuing to thrive. Anna, her mother, elaborates: “Before the operation, the light in our child’s eyes was dying out every day, and she was losing the will and strength to fight for her life. Now, after the lymphatic procedures, the shine in her eyes suggests that she is full of strength, energy, and the desire to live and enjoy every day. We are infinitely grateful from the bottom of our hearts to the management, staff and surgeons at duPont Hospital for their efforts, skill and desire to help us.”