— Lisa Brady, after learning her baby had been born with cancer 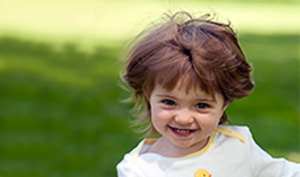 Lisa Brady didn’t become a mom until she was 41, so she was excited beyond words to have a baby. But she couldn’t have imagined what she and her husband would soon be facing. Just after their daughter Ayla was born, the neonatologist noticed that her breathing was shallow and she had an elevated temperature. They whisked her away. Tests soon revealed that a blood vessel, which normally closes by itself in newborns, hadn’t closed in Ayla.

Ayla was transferred to Nemours/Alfred I. duPont Hospital for Children in Wilmington, Del., where they gave her medication to correct the problem. Suddenly, her blood pressure shot up. The cardiologist ordered a CAT scan. She came in afterward, put her hand on Lisa’s shoulder and said: “The scan showed something unexpected. There is a mass on her adrenal gland — it is a neuroblastoma, a malignant tumor.”

Lisa sobbed uncontrollably. She thought, “How can this be? What did I do wrong?” She didn’t know that babies could be born with cancer.

Gregory Griffin, MD, a Nemours pediatric oncologist, told Ayla's parents that the mass was a stage 2 tumor and that she would need chemotherapy. All in one day, little Ayla had a bone marrow aspiration, a biopsy of the tumor and placement of a central line so that she could receive chemotherapy.

After spending a month in the hospital, Ayla was able to go home. By 4 months old, she was finished with treatment. Today, Ayla is a bundle of energy who adores rough and tumble play and running around in her backyard.