"My serving technique improved — it was no longer limited by poor posture. The surgery made me almost 2 inches taller (now 6’1”) and maybe this added a little more leverage and power." 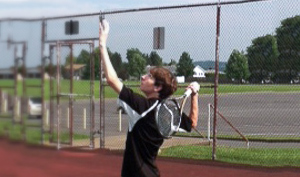 Bill always knew he had had poor posture because, for the past 14 years, his mom often reminded him to “sit up straight.” What they didn’t know at the time was that Bill couldn’t physically sit up straight despite his best efforts.

Bill has been an avid competitive tennis player since he was 7 years old. He didn’t wonder if poor posture impacted his ability to play tennis, but now he thinks it probably did in some ways.

At age 14, during a preseason physical, a severe curve was detected in Bill’s upper back. The advance of the curvature was causing the skin on his spine to develop stretch marks. Not realizing how severe his spinal curvature was, Bill initially thought the stretch marks were calluses from carrying his school backpack.

He was referred to Suken A. Shah, MD, a pediatric orthopedic surgeon at the Spine and Scoliosis Center at Nemours/Alfred I. duPont Hospital for Children in Wilmington, Del. Dr. Shah diagnosed him with Scheuermann’s kyphosis, a condition in which the vertebrae grow unevenly and become “wedge” shaped. People with this condition experience a loss of height and, depending on the location of the curve, may have a visual “hunchback” or “roundback.”

So, surgery was recommended to correct the kyphosis since it was severe and likely to worsen. Although Bill was not experiencing problems at the time, many teens and young adults with the condition can have pain and difficulties with certain activities. They also can have significant concerns about their appearance and self-image. Bill had successful surgery after his sophomore year before real issues had a chance to develop. Bill remembers the recovery and return to the game the most.

“I had to rebuild myself. I wasn’t allowed to touch my racquet or exercise for 3 months. Dr. Shah prescribed 20 sessions of rigorous physical therapy. I started hitting tennis balls with my dad. Then I had countless 60- to 90-minute practices with my tennis coach over more than 3 months. I worked very hard and gradually got my strength back,” Bill remembers. “Yes, I now have limitations bending and turning. But people agree you cannot tell I had the surgery from watching me play. My serving technique improved — it was no longer limited by poor posture. The surgery made me almost 2 inches taller (now 6-foot-1) and maybe this added a little more leverage and power.”

Nine months after surgery, Bill had his best tennis season ever, earning 11 wins and a single loss as a varsity player. The next year, as a senior in high school, Bill continued to improve his game — moving from a doubles position to the second singles position. He is attending the Schreyer Honors College at Penn State University and will continue playing tennis at the club level.