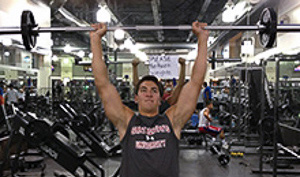 “Do what you have to do to get to where you want to be.” This is the thought that fueled AJ as he recovered from spine surgery. “I kept telling myself, ‘Keep fighting, keep pushing through the pain,’ because I knew the start of ice hockey season was just a few months away.”

AJ was born to skate. By the age of 3, he sported his own pair of skates and at age 4, he was playing ice hockey. Over time, AJ played football, basketball and other sports, but ice hockey remained his first love. He never wanted to leave the rink. By age 9, he was playing on travel teams. His family shared AJ’s passion for the sport. His dad attended every game and as avid Flyers fans, the family has been season ticket holders for years.

The summer before his sophomore year in high school, an annual physical exam revealed a severe curve in AJ’s spine — scoliosis. This was surprising, as AJ had never experienced any pain or any problems when playing hockey. Initially, he saw a specialist about spine surgery. But the post-surgery outlook the orthopedic specialist described was bleak: He would never play hockey again. It was time for another opinion.

Having already had five surgeries to correct a congenital condition called “microtia,” an ear malformation that affects hearing, AJ had a fighting spirit and refused to think negatively. Some additional online research led AJ and his family to the Spine and Scoliosis Center at Nemours/Alfred I. duPont Hospital for Children in Wilmington, Del. There, Suken Shah, MD, a pediatric orthopedic surgeon met with AJ and his family. He discussed the surgery that would be needed to correct the C curve (or scoliosis) in AJ’s spine and conveyed an optimistic outlook and an eventual return to the game.

Getting Back in the Game

Recovery was gradual. At 6 weeks post-surgery, AJ started back to school with half-day sessions building over time to full days. His return to the ice was gradual, too. He started skating laps, avoiding all physical contact with other players. As time wore on, he began practicing and was back with his teammates by the start of the season. That year, as a sophomore, AJ made the varsity ice hockey team.

AJ has continued to excel in academics and in sports. He is now a finance major in college, having just completed a summer internship with an investment firm and continues to play competitive ice hockey for Saint Joseph’s University.