"I never thought this would be possible." 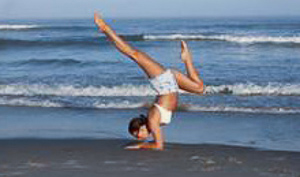 Tara has always been an avid athlete. At the age of 2, she enjoyed gymnastics and began competitive dancing in second grade. Surprisingly, the curve in her spine (that wouldn’t be diagnosed for years) never bothered her or impeded her ability to perform until her early teens.

When Tara was 10, her family chiropractor sensed something wasn’t right and ordered a spinal X-ray of her spine, which revealed a slight S-curve. Tara’s pediatricians then referred her to Candice Holden, MD, a pediatric orthopedic surgeon at Nemours duPont Pediatrics in New Jersey.

Dr. Holden diagnosed Tara, at age 11, with adolescent idiopathic scoliosis, the most common form of scoliosis (“idiopathic” means the cause of the condition is unknown, but it is most likely genetic). She prescribed a brace, a non-surgical intervention used when curves are progressive and the child is still growing. The theory is to apply pressure against a curve to possibly allow more normal growth of the spine — limiting further curve progression and avoiding surgery.

Taking the Next Step: Surgery

In Tara’s case, the brace ended up being a tunnel for the family cat instead of something Tara wore. So, at age 14, surgery became the best option.

She was referred to Suken Shah, MD, a spine surgeon at the Spine and Scoliosis Center at Nemours/Alfred I. duPont Hospital for Children in Wilmington, Del. Not long after Tara turned 15, Dr. Shah corrected her curve. Forever the athlete, Tara demonstrated her readiness to be discharged from the hospital by performing a split in her hospital gown. There was no doubt she was ready to go home.

One month after surgery, Tara began physical therapy. Her goal was to dance and do gymnastics again.

At 6 months post-surgery, Tara is doing the things she loves with little pain and no limitations. In her words: “I never thought this would be possible.”