"All of his success and everything he does is thanks to the WREX [Wilmington Robotic EXoskeleton]." 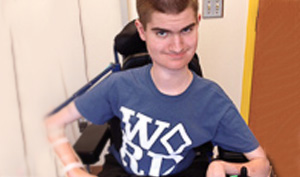 Matthew was diagnosed at 15 months old with spinal muscular atrophy (SMA), a condition that causes weakness in his extremities. As Matthew grows, it becomes an even bigger problem, as his limbs become heavier and harder to move. It became harder and harder to perform the activities of everyday life.

Then, when Matthew was 9 years old, his family brought him to Nemours/Alfred I. duPont Hospital for Children in Wilmington, Del. They saw William G. Mackenzie, MD, chair of the Department of Orthopedics, and Mena T. Scavina, DO, a pediatric neurologist, in their shared muscle clinic. Dr. Scavina told them about the work Tariq Rahman, PhD, was doing with a lightweight exoskeleton to help patients with conditions like Matthew’s.

A Device That Opens Up Possibilities

Matthew and his mother met with Tariq and Whitney Sample, a research engineer, and agreed to try out the Wilmington Robotic Exoskeleton (or WREX, for short). Tariq and Whitney fitted young Matthew with his very own WREX. It’s a lightweight device that comes in plastic or metal and uses elastic bands to assist a child’s muscles. The WREX allows full range of motion and can be adjusted for each child. It can be attached to a wheelchair or to a body jacket. “Tariq and Whitney worked to fine-tune it just for Matthew’s size, weight and muscle strength. Matthew took right to it and immediately felt at home using the WREX. Once he got it, he hasn’t taken it off since!”

Matthew was suddenly able to control his limbs in ways he never had. He excelled in school and was able to type on a computer keyboard, which would have been nearly impossible otherwise. He also developed an intellectual interest early on in how all the joints and rubber bands worked and how Tariq and Whitney do what they do.

“We were developing the large WREX at the time. Matthew has an earlier version. We had to make it just right for Matthew, as he was weak and very sensitive to the device’s movement,” says Dr. Rahman. “He is a very intelligent young man and he noticed every squeak it made and told us if a bearing was shot before it showed any visible signs! The WREX is an indispensable part of him now. It is amazing how a bunch of nuts and bolts and rubber bands have helped him so much. And the work he’s done in wearing it has been so helpful as we develop the WREX for other patients.”

Brita agrees: “I think that the fields of science and medicine often talk about promising treatments, but those treatments always seem to be off in the future. With the WREX, this was a treatment that helped immediately. Tariq and Whitney have both worked hard to improve the experience for Matthew. We came in every 6 months or so, in conjunction with Matthew’s doctor appointments. They always made time to see us and make sure everything was working OK. As Matthew grew, Whitney swapped out different pieces to match Matthew’s development.”

A Researcher in the Making

Today, Matthew is already a college junior at the age of 18. He’s discovered a real gift for mathematics and did some research of his own as a high school student. He was accepted into multiple science programs and even won a prestigious scholarship. He was a paid research assistant for the University of North Carolina in the summer of his freshman year. While there, he wrote a paper that was published and won the "Best Paper" award at the international Conference on Implementation and Application of Automata. He was again a paid research assistant for the Computer Science faculty at Lehigh University his second summer, and has been taking graduate-level classes in math since his first year. Matthew plans to graduate in May 2015 with two Bachelor of Science degrees — in math and computer science.

Brita has nothing but good words for Nemours and Dr. Rahman’s WREX program. “It’s been a truly wonderful place. The doctors are so committed to their patients. And Dr. Scavina has always focused on what we can do to improve Matthew’s life,” she says. “I’m very grateful for their support and for the support of Tariq and Whitney. Without it, Matthew would not have been able to accomplish all of the great things he has so far, not to mention all of the things to come. All of his success and everything he does is thanks to the WREX.”