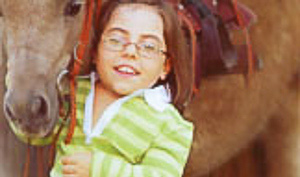 Mackenzie sits tall in the saddle when riding her horse. She competes in horse shows, goes swimming and loves to read. Even though Mackenzie has a form of dwarfism, almost nothing slows down this friendly, energetic young teen.

Mackenzie competes in the “Exceptional Rider” category in local horse shows. Attired in bright pink riding pants, helmet and driving apron, she also drives a pony cart. “There are some things I have trouble doing, like reaching the light switch, seeing what’s on the countertop, and walking fast enough to keep up with my friends,” she says, “Plus, I can’t do gymnastics because of my neck.”

“We knew after the first few months of my pregnancy that there would be a problem with our baby,” says Mackenzie’s mom, Michelle. “In fact, the best doctors in the country were telling us that she would probably die soon after birth. It was devastating. Here was a baby we already loved. We decorated her nursery and hoped for the best.”

A neonatal team was called in for the delivery because they expected severe breathing problems with the newborn. “Mackenzie came out kicking and screaming,” remembers her dad, Len. “She didn’t need any help at all. We were so relieved.”

Just 10 days old, Mackenzie made her first visit to Nemours Children’s Hospital, Delaware in Wilmington, Del., to see geneticist Charles Scott, MD. “He first told us that she most likely had a fatal form of skeletal dysplasia (a condition that causes abnormal growth of the skeleton) and that there were no babies who had survived this condition,” says Michelle. 18 anxious months and many visits later, Mackenzie’s diagnosis was changed to spondylo-epiphyseal dysplasia, a form of dwarfism that does not affect life expectancy.

At age two, under the care of William Mackenzie, MD, Mackenzie underwent surgery to fuse several vertebrae in her neck to the base of her skull. She wore a surgical “halo” attached to a body cast for three months. Mackenzie had a later operation to correct the alignment of her hips. She also receives care from Sharon Lehman, MD, of the Division of Ophthalmology, for severe myopia (near-sightedness), a common complication of dwarfism.

Mackenzie’s family boards and trains horses, and teaches riding at their small farm in rural New Jersey. Although quite small in stature, Mackenzie helps muck out the stable and feeds the horses. In addition to her miniature horse Tuffy, she has Mooky, a thoroughbred, and two dogs. Mackenzie’s sister says, “Sometimes the kids at school ask why Mackenzie is so small. I always say that it’s just the way God made her. They don’t believe that she is actually 13.”

With the help of her loving family and her team of doctors at Nemours Children’s Hospital, Delaware, this exceptional young girl can continue to meet all the challenges of life with energy and excitement.