“The true miracle here is that after only 5 days of being home, Summer was pain free, running and being a normal 4-year-old.” 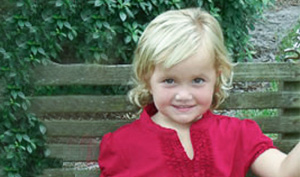 Swirling through the house in pink fairy wings — with matching pearls, tulle skirt and purple boa, little Summer is every inch the “Princess” she declares herself to be. Yet almost a year ago, this engaging 4-year-old with blond hair and dancing eyes, braved surgery to take care of her serious urological conditions.

Summer’s mother, Melissa, first became concerned when her daughter began to complain of pain and burning while urinating.

Melissa remembers, “She would punch her tummy and say, ‘It hurts, Mommy.'”

Melissa initially thought that it might just be constipation, but her worries increased when she saw blood in her daughter’s urine. She immediately took Summer to a primary care doctor.

“We saw several doctors,” recalls Melissa, “and some seemed to think that it was recurring urinary tract infections. It wasn’t until we took our daughter to Nemours Children’s Clinic that we found out what was wrong.”

Dr. Hubert Swana, a pediatric urologist at Nemours Children's Specialty Care, Orlando, examined Summer and ordered specialized urologic testing that included a renal (kidney) ultrasound, a voiding cystourethrogram (a special test used to check for problems in the structure or function of the urinary system) and a nuclear kidney test.

These tests revealed that Summer had several serious urological problems: a cyst in her bladder, an extra urethra tube on her left kidney and a condition called vesicoureteral reflux (VUR), which describes the abnormal flow of urine from the bladder back into the ureters and sometimes to the kidneys. Left untreated, VUR can cause kidney infections, which can lead to scarring and sometimes result in kidney damage.

Melissa says, “Once Dr. Swana came into the picture and diagnosed her condition, he helped my husband Chris and I see how serious the situation was. We then realized that Summer had lived with this her whole life.”

Summer was admitted for outpatient surgery to decompress the cyst. The surgery was successful and a few months later, Dr. Swana and Nemours Urology Division Chief, Dr. Mark Rich, performed a complex surgery that included several procedures: heminephrectomy to remove a cap on top of her left kidney, reconstructive bladder surgery to repair damage caused by the cyst, kidney reflux surgery, and removal of an extra ureter tube.

Throughout the ordeal, Melissa says that Dr. Swana was able to ease her and her husband Chris’ concerns by his confidence that he could fix Summer’s condition.

Melissa says, “The true miracle here is that after only 5 days of being home, Summer was pain free, running, and being a normal 4-year-old.” Melissa and her husband, Chris, can’t say enough about the care their daughter received from the urology team and from Dr. Swana.

“Dr. Swana called to check on our “Princess” on his vacation and even weekends. Summer brags to the world that Dr. Swana is her doctor.” Melissa calls Nemours, “A blessing from above. What would we have done without Nemours?”