"I can't say enough about Nemours Children's Clinic. Dr. Joyce, our nurses and everyone there put us at ease at a time when we were very nervous about what to expect. With their help and care, Eilish has a second chance." 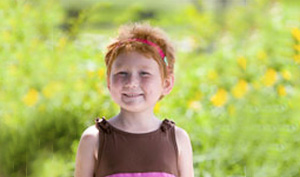 Four-year-old Eilish began showing signs that she was not at all well. She was irritable, sleeping more than usual and a little jaundiced. Then she developed a blood clot in her gum and a red rash on her neck.

Eilish’s mother Missy went online to look for some explanation for these symptoms. Although she did not find a definitive answer, Missy already had a heavy heart and the feeling that their family was about to go down a difficult road with their little daughter.

Missy, now very worried, took her daughter to the pediatrician. As the doctor examined Eilish and felt her liver and spleen, Missy saw her face change. The doctor sent Eilish out into the waiting room with a nurse and gave Missy a long, firm hug, telling her that her daughter would need some tests. When Kevin and Missy took her for blood work and X-rays — Eilish didn’t complain once, not even when she got stuck with a needle. They returned to the pediatrician’s office to await the test results.

Missy says, “When the pediatrician told us it was leukemia, I felt as if I had fallen into a black hole. She told us it was amazing that Eilish was even walking around. Her hemoglobin had fallen to three (between 11 and 16 is normal). She sent us right to Wolfson Children’s Hospital (Jacksonville, Fla.), where we were immediately welcomed.”

Michael Joyce, MD, a Nemours oncologist, told Missy and Kevin that Eilish had acute lymphocytic leukemia (ALL), but that there was a very good cure rate for the disease. “My fears began to subside when I realized what good hands we were in. Everything began to change for the better,” recalls Missy.

The couple talked to their sons, Noah (10) and Ezra (8), about what was happening to their sister. “Noah wanted to know if he could 'catch' leukemia, too, and we reassured him that would not happen. A wonderful nurse explained everything to us in detail,” remembers Missy.

The Road to Recovery

Eilish spent two days in the Pediatric Intensive Care Unit (PICU). She had a “port-a-cath” surgically implanted so that she could receive blood and platelets to get her hemoglobin back to normal, as well as chemotherapy and other medications. After a few more days in the hospital, she went home.

Dr. Joyce assured the family that Eilish’s leukemia was a low-risk form of the disease and that there was a good chance treatment would be successful. “The first month of chemotherapy was awful — she seemed so frail,” says Missy. Even so, we spoke only positive words about her illness. Eilish proved to be stronger than we could ever have imagined.

Eilish received chemotherapy for two years — mostly on an outpatient basis — at Nemours Children's Specialty Care, Jacksonville. She has been hospitalized a number of times with fevers and once for 10 days with a serious respiratory infection. Her thick, curly strawberry blond hair fell out as a result of the chemo, grew back and then fell out again.

Things are returning to normal for Eilish, who loves school and is very social. “Her highly organized nature equipped her well for all she had to face. She’s so strong and faces things head-on,” says Missy. Her last maintenance treatment was in January of 2011. Her hair is growing back and her impish nature has returned.

“I can’t say enough about Nemours Children’s Clinic,” says Missy. “Dr. Joyce, our nurses, and everyone there put us at ease at a time when we were very nervous about what to expect. With their help and care, Eilish has a second chance.”