“We have become very attached to everyone who cared for Griffin during his long ordeal. I often thought, ‘How lucky are we to have such awesome doctors’’ 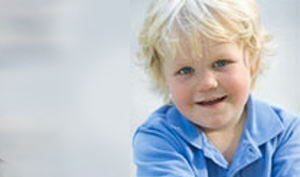 You’d never know it from looking at this sturdy little boy, but Griffin has endured more in his few years than most people do in a lifetime. When he was born, the pediatrician noticed an abundance of tiny red spots, known as "petechia," under Griffin’s arms. Petechia indicate a low platelet count, which results in an inability of the blood to clot properly. It was the beginning of a very long journey for Griffin and his family.

Alarmed by what he saw, the doctor immediately transferred Griffin to Jacksonville’s Wolfson Children’s Hospital, which is staffed by Nemours pediatricians. There, doctors gave him donor platelets for two weeks to help his blood clot. Eventually, Griffin was diagnosed with a very rare disease — juvenile myleomonocytic leukemia (JMML). Although he became quite pale when his blood count was low, there were no other symptoms.

Griffin’s oncologist, Scott Bradfield, MD, put him on medications to lower his high white blood cell count and ordered more platelet transfusions. His mother Kelly remembers: “One terrible night, we had to rush him to the hospital because he was bleeding from the eyes, ears and mouth. At the age of 6 months, his spleen had to be removed. That bought us about five months of extra time.” His family sponsored a blood drive to find AB negative donors.

When Griffin was just over 1-year-old, he underwent chemotherapy to deplete his bone marrow and then received a bone marrow stem cell transplant from a donor who was a good match. Kelly remembers asking the nurse, “That’s his new life? That bag of blood?” To her, it seemed unbelievable — almost anticlimactic.

There were some anxious moments when the transplant didn’t seem to “take” right away. Kelly says, “The nurses and doctors kept giving me this look — as if Griffin was sliding downhill fast and wouldn’t be with us for long.”

In fact, Griffin was on his deathbed several times. He had surgery to put in “ports” and had 17 transfusions in his first year. He spent eight months in the hospital by the time he was 2. Kelly recalls, “Griffin battled one serious infection after another while all this was going on. He had to have a feeding tube for a while to help him get enough nutrition and I learned to manage his care at home.”

Griffin was on steroid drugs for a long time, which can weaken bone structure. “As 2-year-olds love to do, he was jumping up and down on our bed,” says Kelly. “In a flash, he went flying off, and broke both arms!” Because he had missed all of his childhood vaccinations while ill, Griffin had to receive them all at once to make sure he was protected.

Amazingly, Griffin finally began to get better. After all that he had been through, physical therapy was needed to help him regain muscle strength and walk again by his second birthday. By the time he was 2.5 years old, his parents felt that he was finally getting back to normal.

The whole experience was extremely difficult for the whole family, especially for Griffin’s dad John, who survived lymphoma as college student. Kelly says, “The older boys learned a lot during Griffin’s illness and we had outstanding support from our church, neighbors, the kids’ school and our families.”

“We have become very attached to everyone who cared for Griffin during his long ordeal. I often thought, ‘How lucky are we to have such awesome doctors’.” Dr. Bradfield was by our side every step of the way. He even invited my husband John, who had become very well-versed in the disease by this time, to attend a symposium with him in Atlanta about European and U.S. protocols for treatment of JMML,” says Kelly.

An Abundance of Gratitude

Griffin’s family lives with the knowledge that there is a 40-50 percent chance of relapse. If that happens, he would have to have another bone marrow transplant. Kelly observes: “In the meantime, you cannot imagine how good it feels to see my boys playing in the yard together. Griffin is right in there mixing it up with his brothers, like nothing ever happened.”

Kelly sometimes asks herself: “Am I worthy? Why am I one of the lucky ones whose child lived?” She credits the skill and compassion of Nemours physicians and nurses, as well as her family’s strong faith, in giving Griffin another chance at life. “I’m a changed person,” says Kelly, “In fact, our whole family is changed. We have a new perspective on living.”