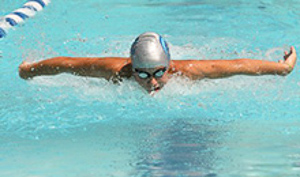 To look at James today, an active teenager and competitive swimmer, you would never know that he spent more than 8 years of his life battling scoliosis. And he won.

The family traveled to the Spine and Scoliosis Center at Nemours/Alfred I. duPont Hospital for Children in Wilmington, Del., for a second opinion with Suken Shah, MD, a pediatric orthopedic surgeon and spine specialist. Dr. Shah confirmed the original diagnosis and measured a 32-degree curve in James’ upper back and 19-degree curve in his lower back.

Although bracing was recommended as the best option to halt the scoliosis, James’ parents were skeptical. Their daughter had worn a Boston brace without success and, ultimately, had to have spinal fusion surgery to correct her curve. Dr. Shah explained that James would wear a ventilated, custom-fitted Wilmington brace, developed by Nemours’ orthopedic researchers, that could stop further curve progression and prevent surgery through a combination of external forces. The success or failure of halting his curve would be entirely dependent on the amount of time James wore his brace.

And wear the brace he did. James was absolutely committed to wearing his brace — from the age of 8, when he was diagnosed with scoliosis, until he was 16.5. He wore it under loose-fitting clothes everyday to school, would take it off for sports or after-school activities, and then wore his brace to bed every night, averaging 18 hours a day for 8.5 years.

These are James’ Wilmington braces (developed by Nemours’ orthopedic researchers), which were customized for him as he grew.

Through it all, James kept a positive attitude and didn’t let wearing the brace keep him from being with his friends or doing anything he wanted to do. Because of his compliance with wearing the brace, his curves never progressed — in fact, his lower curve disappeared completely and his upper curve was significantly reduced. When James stopped growing, he no longer had to wear the brace.

Today, James is a well-rounded, fun-loving young man. He recently swam the backstroke leg of the winning 200 medley relay in the New Jersey State Swimming Championships. In his spare time, he loves to skateboard, fish and surf. James also wants to help other kids cope with scoliosis and wearing a back brace. After all, “scoliosis is a part of who he is.”