"Though some time has passed since Carley’s surgery, I still often feel so overcome with gratitude that my heart could burst… It would have been enough to have had an excellent surgeon with a tolerable bedside manner. But we had the good fortune of finding someone truly exceptional who really cares about our daughter’s progress and is always there for us. We couldn’t be more thankful." 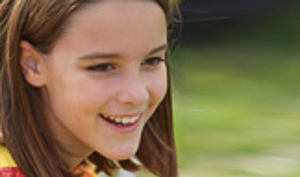 Unless you’ve been there, it’s hard to imagine the shock of a serious diagnosis. In our daughter Carley’s case, for nearly a year we had seen the signs that something was wrong. First, it was the pain in her legs and a loss of flexibility. Then her gait (how she walked) changed. I had brought our concerns to our pediatrician, only to be told repeatedly, “It could be nothing but a pulled hamstring.” I finally insisted on a referral to an orthopedist.

On the day after her ninth birthday, we learned Carley’s problem was not in her legs, but in her spine: She had severe spondylolisthesis (when one of the lower spinal bones slips forward in relation to another) and she might need surgery.

Initially taking a conservative route, Carley started physical therapy, but her pain and flexibility did not improve. Instead, as the weeks went by, walking became more difficult. On our family walks, she would limp along until it was too much for her, and then we took turns carrying her on our backs. When the long-awaited soccer season arrived, she barely made it through one practice. Two months later, on Halloween, her legs gave out while trick-or-treating.

On top of the physical difficulties that were interfering with her life, we faced apprehensions about whether her condition would progress far enough to cause permanent nerve damage, or if that could be precipitated by an accident of some kind. We also worried about the possibility of her losing bowel or bladder control. With all of these burdens, it started becoming clear that we had to think about surgery.

The Next (Necessary) Step

After we made the decision for surgery, we endured months of waiting. We had the certainty of knowing we chose the most skilled surgeon, Suken Shah, MD at the Spine and Scoliosis Center at Nemours/Alfred I. duPont Hospital for Children in Wilmington, Del. Dr. Shah would perform the most advantageous surgery for Carley’s future, but we were, nonetheless, hit with occasional waves of doubt — what if something went wrong?

The morning of the big day, the alarm went off at 5 a.m. at the Ronald McDonald House (right across the street from the hospital). We were all in a bit of a daze as we made our way to the hospital. Carley was afraid and wouldn’t talk or take the “happy juice” at first. Eventually, she relented, took the medicine, and changed into a gown. Dr. Shah came in and explained once more what would happen during the surgery. He patiently answered our last questions. Finally, the nurses wheeled Carley away around 8 a.m., still sitting on the bed hugging her knees to her chest.

The Road to Recovery

While Carley was in surgery, a nurse came out every hour or so to update us on the progress of the surgery. All reports were good, but as the afternoon wore on, so did my nerves. Finally, Dr. Shah came out to tell us the surgery was over and everything had gone well.

After the operation (while she was still staying at the hospital), physical therapy was one of the biggest challenges. It was hard work for her and tricky to time the painkillers. So she had pain relief during the therapy sessions, but was steady enough to stand and try to walk. Her ankles and legs were so weak that she could barely support herself. But bit by bit, over the course of our stay we saw gradual improvements which gave us hope.

Unexpectedly, on the fourth morning, she walked the length of the hall. When our surgeon came to visit that afternoon, as soon as she saw him, she got out of bed and walked across the floor completely on her own, stunning us all. Since she made so much progress, she was allowed to go home.

During Carley’s approximately 10-week recovery, the best thing that happened that winter was the record-breaking snowfall. She was supposed to walk every day, so we bundled her up and went out, no matter what the weather. She would sometimes crawl all the way around the block along the banks of snow at the side of the road, eating the snow as she went. Her sisters joined her on these expeditions, and they became the highlight of our day.

Finally, at about eight weeks, out of the blue, her nerve pain disappeared, except for occasional little twinges in her toes and, within a short time, she was living a normal life.

Seven months after surgery, Carley returned to Kung Fu and was back on the soccer field. The transformation was amazing. She had much greater endurance than ever before. She willingly took the positions that the other girls didn’t want because they required so much running — and she had high energy through the end of the game.

This was a different Carley than the one who fatigued easily from the time she was a baby. Besides correcting the spondylolisthesis, stabilizing her spine seemed to have far-reaching effects and improved her life in ways that we still witness every day. When school started, her newly increased stamina carried over into her school work. She even started wearing sneakers for the first time in her life (before, she’d had sensitivities to shoes and socks).

Though some time has passed since Carley’s surgery, I still often feel so overcome with gratitude that my heart could burst. What could have been a nightmare became a blessing for Carley and our family because of the success of the surgery, obviously, but also because of the extraordinary care and support we received during that time from our friends and our medical team.

It would have been enough to have had an excellent surgeon with a tolerable bedside manner. But we had the good fortune of finding someone truly exceptional who really cares about our daughter’s progress and is always there for us. We couldn’t be more thankful.