"We were extremely worried about how everything would go, but the hospital treated us very well. They were very concerned for Alexander’s well being. Now he has no limitations and is able to do everything his brothers do.” 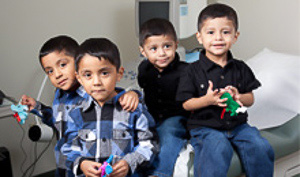 Alexander and his twin brother Alex had a normal birth and appeared healthy when they went for their first pediatrician visit less than two weeks later. When Alexander’s doctor detected a heart murmur, he was immediately referred to Nemours Cardiac Center.

An echocardiogram led to a diagnosis of Tetralogy of Fallot (TOF), a combination of four heart defects: pulmonary stenosis; a thickened right ventricle (ventricular hypertrophy); a hole between the lower chambers (ventricular septal defect); and an aorta that can receive blood from both the left and right ventricles, instead of draining just the left. While children with TOF often appear bluish because of the obstruction of the right ventricular outflow tract, this was not the case with Alexander.