“When you have kids, you want a doctor’s office that is set up for them. And Nemours is. The waiting room, the things to do, the way the staff and doctors engage the children — it’s all just for them.” 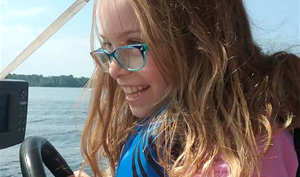 Hilda, a St. Augustine, Fla., mom, knew her two kids had a lot in common. But she never thought they’d have the same commonly undiagnosed eye problem.

She first realized something wasn’t right with her daughter’s vision during a visit to their pediatrician’s office.

“Ava was starting to read already, and there was no outward sign that something was wrong,” says Hilda, who was living with her family in Ft. Lauderdale, Fla., at the time. “But when they covered her left eye, she couldn’t read any letters with her right eye.”

Four-year-old Ava was diagnosed with amblyopia (also called “lazy eye”). Because amblyopia usually occurs in one eye only, many parents are unaware of the condition. But if left untreated, amblyopia can lead to permanent vision loss.

Hilda’s pediatrician told her that Nemours was the place to go for kids’ ophthalmology, even though it was more than 300 miles away in Northeast Florida. “I tucked that away as a good thing to know,” says Hilda.

Knowing that vision issues are often hereditary, Hilda had her son John, who’s two years younger than Ava, tested when he was a little older. Like his sister, John had amblyopia, as well as farsightedness.

When their family relocated to St. Augustine, Hilda knew that her children, then 8 and 6 years old, were close enough to get expert care at a Nemours location. The siblings began receiving pediatric eye care at the Nemours campus in Jacksonville’s San Marco neighborhood.

After a few visits, Hilda learned about Nemours’ Jacksonville South office, which quickly became her family’s most convenient place to get the eye care they needed. “It cut my travel time in half,” says Hilda, noting how important it was for her to bring Ava and John to a child-friendly environment. “When you have kids, you want a doctor’s office that is set up for them. And Nemours is. The waiting room, the things to do, the way the staff and doctors engage the children — it’s all just for them. That was something I really appreciated.”

The Importance of Early Eye Care

Hilda encourages other moms to get their kids’ vision checked out by a pediatric eye doctor if they fail a vision screening or suspect something is wrong. It could be a problem that often goes undetected.

“A lot of children don’t like going to the doctor. But if they have a problem like we had and you wait, usually things get worse,” she says. “Time is not your friend. Seek good, qualified treatment.”