"Dr. Gabos looked me in the eye and talked with me, answering all of my questions. I trusted him and I knew he would take care of me."

— Anna, a patient of the Spine and Scoliosis Center at Nemours/Alfred I. duPont Hospital for Children 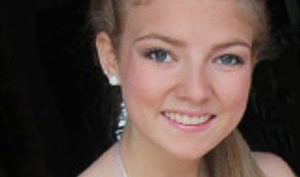 Having had spine surgery just 4 weeks earlier, Anna never thought she would be going to her senior prom and, most definitely, not in a backless dress. But she did.

Anna’s spinal problems had been a part of her life for a long time. When she was 14, Anna was diagnosed with scoliosis by her pediatrician. She had always felt uncomfortable in bathing suits or in any clothes that would reveal her curved back. Initially, the curve didn’t appear to progress as Anna continued to grow. So, it was determined that no further intervention was necessary.

Several years later, Anna fell and was sent to the Emergency Department (ED), where she had X-rays to rule out a broken collar bone. Unexpectedly, the X-rays showed that the curve in her back had progressed to a severe degree. So an appointment was scheduled with Peter G. Gabos, MD, at the Spine and Scoliosis Center at Nemours/Alfred I. duPont Hospital for Children in Wilmington, Del.

Dr. Gabos diagnosed Anna with late progressive adolescent idiopathic scoliosis (a side-to-side curvature of the spine) and thoracic lordosis (a condition in which the spine’s normal front-to-back curve reverses, growing significantly inward in the middle of the back). Dr. Gabos recommended surgery to correct her condition.

Having researched other hospitals and specialists to find the right fit for her daughter, Anna’s mom recalls their first visit with Dr. Gabos, “He made Anna feel like she was his own child.” Anna agrees: “Dr. Gabos looked me in the eye and talked with me, answering all of my questions. I trusted him and I knew he would take care of me.”

Only 4 weeks after Dr. Gabos surgically straightened Anna’s spine, Anna says: “I didn’t think I’d be able to do half of what I can do now. I feel great — and I’m more comfortable with how my back looks now (even with my scar) than I ever was before.”

Anna is back to driving, swimming in her pool, working at a summer job — and she’s excited about attending college.