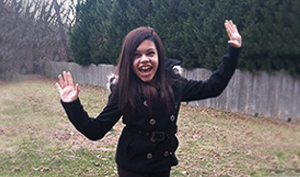 The message was always the same: “She’ll grow out of it.” That’s what Sammy’s parents were told each time they saw a pediatrician about the curve in their daughter’s back. And since the family had moved several times, they had heard this same message from each pediatrician they consulted.

Then one day, Sammy was roller skating at an indoor rink with friends. Her mom was watching nearby when a woman approached her, pointed to Sammy, and asked, “Is that your daughter?” Sammy’s mom said “yes” and the woman replied, “She has scoliosis.” Surprised, Sammy’s mom asked, “How do you know that?” The woman answered, “I know that because that’s exactly how I used to look and I had scoliosis.” That conversation changed the family’s course of action.

Sammy was subsequently diagnosed and referred to Peter Gabos, MD, a spine surgeon at the Spine and Scoliosis Center at Nemours/Alfred I. duPont Hospital for Children in Wilmington, Del. After reviewing the X-rays and other tests, Dr. Gabos diagnosed Sammy with a dramatic 104-degree curve in her thoracic spine, resulting from a condition called “congenital scoliosis” (“congenital” means she was born with the condition). He said the only way to resolve a curve this severe was through surgery.

Just 10 years old, Sammy was inconsolable when she heard that she needed surgery. Her mom took her out to the waiting area to calm her down, but nothing worked — until another young girl in the waiting area approached her. She explained to Sammy that she had been very upset and felt the same way 6 months earlier before her spine surgery. She shared her experience with Sammy and even showed her the scar on her back. Sammy began to feel a little bit better.

Because of the severity of Sammy’s curve and the level of difficulty this posed from a surgical perspective, Dr. Gabos partnered with Dr. Shah, also a spine surgeon from the Spine and Scoliosis Center, to perform the 10-hour operation. The surgeons placed two rods on either side of her spine and inserted 20 screws to hold the spine in place after performing a particularly complex part of the procedure, called a “vertebral column resection” (or, “VCR,” for short). This procedure is only performed at a few medical centers in the world.

As Active as Ever

After spending two days in the intensive care unit, Sammy began the real road to recovery. She started physical therapy and progressed to walking and then climbing the stairs. On the sixth day after her surgery, Sammy was discharged from the hospital.

Now, 3 inches taller as a result of her straightened spine, Sammy is back to competitive dancing. She’s quick to showcase her flexibility by doing a split anywhere she can — on the hospital floor or on a park bench. Sammy’s words of advice to young kids in the same situation: “Say ‘yes’ to surgery.”